To bookmark this site: press Ctrl-D.

Three recent reviews of the album
"Tribute to the Spirit". 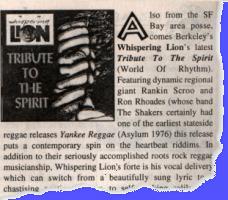 Also from the SF Bay Area posse comes Berkeley's Whispering Lion's latest Tribute to the Spirit (World of Rhythm). Featuring dynamic regional giant Rankin Scroo and Ron Rhoades (whose band The Shakers certainly had one of the earliest stateside reggae releases Yankee Reggae (Asylum 1976), this release puts a contemporary spin on the heartbeat riddims. In addition to their seriously accomplished roots rock reggae musicianship, Whispering Lion's forte is his vocal delivery which can switch from a beautifully sung lyric to a chastising poetic phrasing, to self-mocking soliloquies. While "Lion Lay Down With The Lamb" boasts a simple prescription for peace, easily ingrained through its catchy dubby syncopated percussion, other cuts run the gamut of soound from the rockin skank of "Strange Love" to the John Trudell-like ramblings on the urban "Up 2 Us", to the Morris Day funk stylee on "Love Posse", to the rappish "Rise up Children", to the soulful wailing "Trouble Stop Knocking". Unapologetically quirky rockin reggae. (Baltimojo)

Review in "The Beat"

It is the job of critics to describe the music they hear and the easiest way to describe music is to liken it to something you've already heard. That really isnt possible with Whispering Lion whose Tribute to the Spirit pulls in elements of dance music, conscious reggae, and that bugaboo, alternative, to create soemthing completely different that still slides into the reggae groove. Haling from the East Bay where politics and life swim in the same murky waters. Whispering Lion puts a new slant on politics, love, rock, and reggae. Although Whispering Lion is a solo artist, not a band, he has some excellent support, including legendary guitarist Hux Brown, Rankin Scroo, and Ron Rhoades from one of America's first home-grown reggae bands, the Shakers. With a full pop backing and an unusual "talking blues" style, if I had to liken Whispering Lion to any other artist, I would have to go outside of reggae (though he remains firmly inside of it) to Lou Reed, Beck, or the soul-groove-funk pre-rapsters of the '70s. Musically diverse, with tight arrangements featuring full-strength background vocals, and a lyrical focus on improving the world. (Chuck Foster)

"This is a fun album"

With a discography of cassettes and singles dating back to 1983, it is nice to hear a full-length CD by Whispering Lion, once acclaimed a "...unique blend of Bob Marley and Bob Marley." On Tribute to the Spirit, co-produced by Rankin' Scroo and featuring Hux Brown on guitars, Lion shares songwriting with one of the earliest of American Reggae recording artists, Ron Rhoades of the Shakers. The styles of both Bob's blend nicely, striking an interesting contrast between Rock and Reggae, with a bit of blues, a touch of techno-disco and a lyrical balance between social commentary and lover's ballads (strange and otherwise). This is a fun album, more than a toe-tapper, typifying American Reggae-and then some. (Papa Pilgrim)