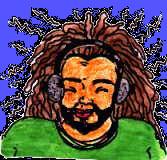 Whispering Lion (aka Michael Z) has been producing, recording, and performing Reggae music ever since his 1984 debut release of "You Aint Cool/Don't Blame Your Pain on me". ("One of the very best reggae debuts ever"-Midnight Dread-Doug Wendt). Here are some of the crucial events in the career of the artist called " a unique blend of Bob Marley and Bob Dylan" (Dub Missive magazine). We give our thanks and praises to all the DJ's and fans and writers who have supported our music through the years.

Read from the top for latest news, to stay update; or start from the bottom to read this page as a bio.

Dec. 31, 2010: NEW YORK ATTITUDE, the latest Whispering Lion album, has been added to the site, as an "online CD" with built-in mediaplayer. This reggae album is only available online and for free! You can also download the MP3s. Plus stay tuned! The fruits of two years of work will be released pver the coming year in the form of 4 more online CDs!

Nov. 16, 2009: MUSIC HEAL THE WEARY TRAVELER, the previous Whispering Lion album, has been added to the site, as an "online CD" with built-in mediaplayer. This roots reggae album is only available online and for free! You can also download the MP3s.

May 20, 2007: Whispering Lion's song "THANK YOU" from the REAL REVOLUTION CD was part of DJ Doug Wendt's Sunday May 20th. 2007 Bandshell set-along with a roster of legendary singers and songwriters

January 2007: REAL REVOLUTION album promotion continues, after a long time recovery from an emergency back surgery (sports injury), that made it hard to perform. Wlion: "So I went deep into my World of Rhythm recording studio writing, recording, mixing, and mastering some brand new Whispering Lion tunes and a heap of awesome riddims and dubs. That music will be available soon."

2006: The track "THANK YOU" from the REAL REVOLUTION album, was chosen for the REGGAE EXPRESS 2006 Compilation CD out of Australia. "Thank You" features Della and Ralston Grant (Twinkle Brothers) and Jah Z on backing vox and Hux Brown on lead guitar.

February/March 2006: REAL REVOLUTION has been send to selected DJs and reggae VIPs, and has started to receive very positive reviews.

May 2006: Official release of REAL REVOLUTION.

August 2005: The Whispering Lion finished his latest, fully independently produced, new album: REAL REVOLUTION, and the website was restyled and refreshed to celebrate it.

May ?, 2001: Whispering Lion Site officially opened. Check out the irie and exclusive special remixes (see next point), also to celebrate the opening. Drop us an email or Sign our Guestbook We'd like to hear from you!

1997: "TRIBUTE TO THE SPIRIT" CD
This full-length CD was Whispering Lion's first CD and his most ambitious project to date. It contained 13 tunes, 12 of which were charted world-wide on radio stations throughout the United States and Hawaii as well as Portugal, Norway, Israel, Guam and many others. As of Feb. 2001, almost four years after the CD was released, some of the tunes are still being charted! The tracks were recorded in various studios around the Bay Area including Rankin Scroo's Crucial Youth studio, Fantasy Studios in Berkeley California, City Sound in San Francisco, and Lower Guido recording studio in Oakland. Local musicians on the record include Hux Brown on guitar (from Toots and the Maytals), Rankin' Scroo on keyboards and percussion, Ron Rhoades, guitar and keyboards, Bonnie Boyer, background vocals (who sang and performed with Prince), Pete Escovedo on congas, Chris Solberg on bass, Puddu Dawes on flute, Norton Buffalo on harmonica, and Alula on lead guitar. Making her recording debut was Fireball Sistah.
Some of the reviews of the CD:
"The syles of both Bob's (Marley and Dylan) blend nicely, striking an interesting contrast between Rock and Reggae with a bit of blues ... and a lyrical balance between social commentary and lovers ballads. This is a fun album...." (Dub Missive, Orlando, Florida 1997)
"Whispering Lion puts a new slant on politics, love, rock, and reggae. Musically diverse, with tight arrangements featuring full-strength background vocals and a lyrical focus on improving the world." (The Beat, Los Angeles, CA, 1998)
"In addition to seriously accomplished roots, rock, reggae musicianship, Whispering Lion's forte' is his vocal delivery which can switch from a beautifully sung lyric to a chastising poetic phrasing, to self-mocking soliloquies. Unapologetically quirky, rockin reggae." (Reggae Runnins, Baltimore, MD, 1999)
In addition to the musical release of "TRIBUTE", Fireball and Whispering Lion had their own very special release on 4/25/97, as their son, Jah Z, (Joshua) came into the world, bringing much love and his own unique vocal style.

1985: Whispering Lion made his club debut at Keystone, Palo Alto, opening for the legendary Twinkle Brothers.
BAM magazine reviewed the show and wrote: "Whispering Lion blends traditional reggae with good old American rock n' roll, emphasis on the reggae...the nine piece band features tremendous backing vocals, good musicians and a charismatic lead singer."
Reggae Calendar reviews "Cool"/Blame" and says, "...You Aint Cool features the most imaginative use of female backing vocals I've heard in reggae music..."
Whispering Lion working with Ron Rhoades of The Shakers records over 20 original tunes at Berkeley Music Group recording studio. Only 1 of these tunes ("Over You" from the Tribute to the Spirit CD) has ever been released. Plans are being discussed to release some of these songs.

1984: "YOU AINT COOL"/"DON'T BLAME YOUR PAIN ON ME" (EP) 12 inch pure vinyl 45:$8.99 (plus shipping), cassette version: $8.99 (plus shipping): email us at wlion@sbcglobal.net)
This classic 12" vinyl EP includes 2 tunes and 2 great dub versions; these songs were recorded at Berkeley Music Group, Berkeley CA., a studio that Michael Z and Bob Marcus owned. Additional tracks were overdubbed by Ron Rhoades of The Shakers "and a host of local musicians stirring up an authentic reggae rush" (BAM Magazine). John Cuniberti. a producer/engineer who also worked with Soul Syndicate and The Shakers, mixed both tunes at Hyde Street Studios in San Francisco. Cuniberti is also responsible for convincing Whispering Lion to release these tunes commercially. "You Aint Cool" was aired on KRE in Berkeley, CA. with Midnight Doug "Midnight Dread" at the controls. Both tunes got massive airplay in the Bay Area and in New York City; the dub version of "Blame" hit #9 on FM 99, "The Quake in San Francisco and #15 on FM 106 WHBI in Brooklyn , N.Y.